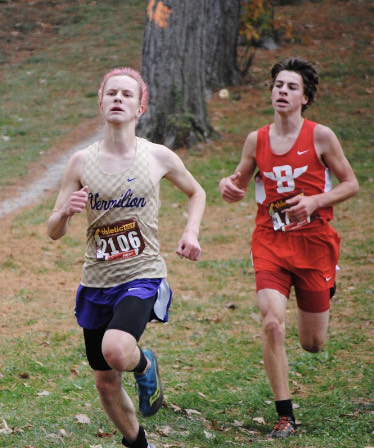 The Vermilion Cross Country team competed in the Northwest Ohio District Championships on Saturday, October 24 at Amann’s Park in Galion.

Alex Hershberger was the top Sailor with his 15th place finish, earning him All-District honors and a birth to the OHSAA Regional XC Championships in Tiffin on Saturday, October 31st. Hershberger’s finish makes it three consecutive years that a Vermilion cross country runner has earned the All-District distinction and qualified to compete at the Regional Championships.

“I am extremely proud of Alex for accomplishing this goal he has had his eyes set on since the end of last season. A year ago he ran a career best at the District meet to finish just outside the top-20” Coach Ryan Ladd said.  “His race day attitude went to a new level this year. His confidence in his training and competitiveness made the difference this year in order to get him to the next weekend”.

Hershberger led the Sailors to an 11th place finish in the team standings. The Sailors scoring was rounded out by Jayden Bearden (52nd/19:11), Aiden Miller (61st/19:31), Zach Jones (67th/19:54) , and Jacob Webb (69th/19:57). This was Bearden and Jones’ final race of their career as a Sailor.
The Lady Sailors were paced by Allison Leopold, who finished 42nd overall with a time of 22:54.  She was followed by Danielle McGlothlin, Grace Morris, and Riley Rhodes who finished 76th, 77th, and 78th respectively. McGlothlin and Morris crossed the line for the final time for the Purple and Gold.

Next Weekend
Alex Hershberger will compete at the OHSAA Regional XC Championships. The Top-12 individual finishers will advance to the OHSAA XC Championnships scheduled to take place on Saturday, November 7th. Hershberger comes into the weekend ranked 45th according to results from this past weekends District Championships. Follow all Race Day updates and highlights on Twitter (@VermilionXC)