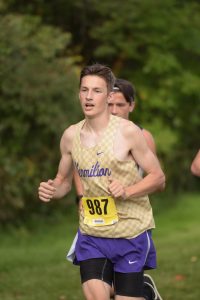 See finished 6th overall in the competitive field of the best runners in Northwestern Ohio with a new career best time of 16:15. The Junior did exactly what he did a year ago by putting himself in contention right from the gun.  At the first check point 800 meters into the race he was in 8th position with a big pack not far behind. By the time he reached the mile mark he had settled into stride with a competitor from the Ottawa District for 5th and 6th place, where he would stay for the remainder of the race.

See’s sixth place finish was an improvement from last years ninth place finish, which was good enough to qualify him a year ago. “Luke ran the same game plan as a year ago, and again it worked perfectly for him” Coach Ryan Ladd said. “A year ago he was an upset to get in with his ranking being outside of the Top-12, this year he was a true contender that everyone was eyeing.  He handled those expectations just as our coaching staff expected”. 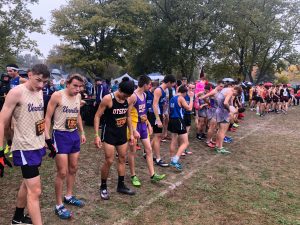 “Isaac had one of the most impressive three week stretches out of a senior that I’ve ever seen” Ladd said. “To finish a career with your top three performances  in the final three weeks is impressive and tells you a lot about the competitive fire he had in him. I think he left everything on the course today, and there is nothing more rewarding than knowing you gave your best effort on the final race”. Lindo finished his career with a total of four (4) All-SBC finishes, one (1) All-District finish, a Regional Championship apperance, and being one of only seven Vermilion runners to break 17:00 since 2000.