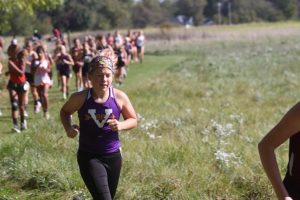 NEW LONDON – The Sailorway XC teams (7th-8th grades) had a final tune-up before next weekends season finale when traveled to New London for the Dan Olien Invitational on Saturday, October 5th.

The Sailors had a total of 16 career best performances over the 3,200M course including 12 from the boys team and four (4) from the girls side.

The Sailorway teams will conclude their season on Saturday, October 12th at the SBC Cross Country Championships at Hedges-Boyer Park  in Tiffin. Next weeks race times are at 9:00am (Middle School boys) and 9:30am (Middle School girls).

High School Report
The Sailors had a five runners participate in order to make any final preparations to compete at next weeks SBC Conference Championships. The Sailors were entered in a 2-mile race to compare times from the beginning of the season. All five turned in significantly better performances from August in that distance including Barrett Yost (15:09) and Danielle McGlothlin (17:46).  Celebrating his final race of his career was Zenon Lopez, who turned in a career best 2-mile time of 18:28.