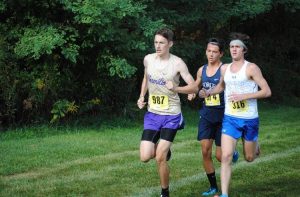 VERMILION – The Vermilion Athletic Department hosted The Obenour Cross Country Invitational on Saturday, September 28th at the Vermilion Athletic Complex.  The meet featured over 1,000 student-athletes participating in one of eight (8) races on a beautiful fall Saturday.

In the boys varsity race, a familiar face for the Vermilion faithful was in the lead pack, as sailor Luke See joined Kyler Kromer (Norwalk), Justin Swanberg (Valley Forge) and Will Warren (Bay) for the first two miles. The lead pack outdistanced themselves from the rest of the field right from the gun.  It was Kromer, who eventually broke free from the other three with his winning time of 16:26.  The fan favorite, Luke See crossed the line 3rd overall with his second best performance of the year with a time of 16:53.

See’s performance helped the Sailors to a 3rd place team finish in Division II/III team standings, eight points from a spot on the trophy podium behind Bay, who was led by the Individual Runner-Up, Will Warren who finished just ahead of See in the Individual results.

The Sailors, who  turned in their top team finish at the Obenour Invitational since 2008 featured an additional Top-20 finish from junior Alex Hershberger who set a new career best time of 18:01. See and Hershberger were followed in the scoring by Isaac Lindo (18:16), Jacob Webb (19:10), and Jayden Bearden (19:59).

As the boys finished it started to heat up, literally and figuratively. The temperatures spiked to close to 80 degrees when with the sun shining on the open course when the girls hit the line at 10:45am, and the competition was just as hot when freshman Katie Clute (Olmsted Falls) claimed the Individual title with a time of 19:33. Clute, a freshman is quickly making Vermilion a favorite place to visit with an individual victory a year ago in the Middle School girls race.  Klute’s first place finish wasn’t enough for her team to claim the team title as they settled for a runner-up team trophy behind Bay.  The Rockets scored an impressive 36 points to claim a second consecutive Obenour Invitational team title with four (4) runners finishing in the top-13.

The hometown fans had some excitement during the Division II/III podium awards as the Sailor girls finished as the team runners-up, claiming their first trophy of the season and first in recorded memory at the Obenour XC Invitational.  The Sailors fell shy of Brookside, who had four of the top-6 division finishers. 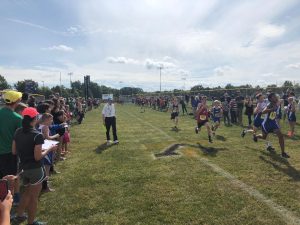 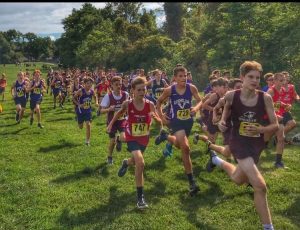