VERMILION – The Vermilion Athletic Department will host the Obenour Cross Country Invitational on Saturday, September 28th on the Sailorway campus. The meet will feature a total of 18 teams between all three divisions including nine (9) Division I teams and nine (9) Division II/III teams. The 18 squads will be on the same starting line, however meet officials will split team results between the divisions after the runners cross the line.  Approximately 800 runners will participate in one of eight (8) races throughout the day.

High School Boys Preview
The boys varsity race features a return visit from Norwalk, the defending Champions at Vermilion and Regional Qualifying team from a year ago. Norwalk is expected to be led by a trio that will compete for Top-10 positions including Kyle Kromer, who is the top returning individual from a year ago from his bronze medal finish  in 2018 at Vermilion.

Norwalk  is expected to be challenged by Copley in the Division I team standings, who was absent from last years meet after claiming the runner-up trophy at Vermilion in 2017.  Copley’s team is senior led team with two (2) seniors in contention for Top-10 finishes including Joseph Barlett, who enters the meet with the fastest recorded time to date thanks to his 15th place finish and time of 16:23 at the highly competitive Wooster Invitational earlier this month.

The Division II/III title will be a fight between Bay, Perkins, and host Vermilion. A year ago the three teams finished first, second, and fourth in the team standings respectively.  Bay is searching for it’s third consecutive Obenour Invitational team title this year.

Luke See of Vermilion comes in as the top Division II/III performer entered in the race thanks to his third place effort at the Mel Brodt Invitational (16:41). See will challenge the top-Division I runners from Copley and Norwalk along with Ashton Russell (Perkins) and a group of Rockets from the Bay JV team.  Host Vermilion is searching to hoist a trophy on their home course for the first time since 2008 when they were the Invitational Champions, the same year when a Vermilion runner crossed as the Individual Champion.

High School Girls Preview
The girls race will feature the return of North Olmsted and Midview who finished as the top-2 Division I teams a year ago, with North Olmsted winning with a narrow 3-point margin. Not only was the team race a narow margin a year ago, but the Individual race couldn’t have been any closer when North Olmsted’s Kayla Simon (1st/20:53.47)  and Midview’s Aubrey Sanzone (2nd/20:53.93) were seperated by a photo finish. Both freshman a year ago are expected to return this year.

Meet officials are hoping for another close and exciting race this year when freshman Katie Clute (Olmsted Falls) toes the line. She enters with the top time in the field this fall after her season best performance of 19:40.  Clute leads an Olmstead Falls teams that is expected to compete for the Division I team title with Copley. Copley is expected by have their own frehsman challenge for the Individual title with Victoria Mcknight. Mcknight enters the meet with the second fastest time in the field with a time of 20:14.

The Division II/III field includes a battle between the last three team Obenour Champions including Bay (2018) and Brookside (2017, 2016) Each team enters Vermilion weekend with two runners ranked in the top-8 in pre-meet standings. The two teams went head to head at the Avon Lake Earlybird Invitational earlier this year, with Bay having the advantage at the August 31st meet. Since that date Brookside has finished 3rd (Tiffin Carnival) and 2nd (Open Door Christian Invitational) with an emerging freshman leading the team at points this year.

Jim Obenour
The Vermilion Athletic Department and Cross Country program named the meet (Formally known as the Vermilion Invitational) in honor of the late Jim Obenour in 1998 after his passing in in the Spring of 1997.  Obenour was an Assistant Cross Country Coach and High School Special Education teacher at Vermilion when he died with a fight from cancer at the age of 51. 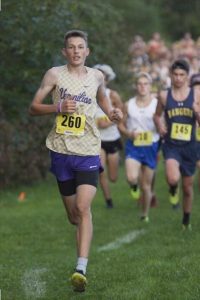 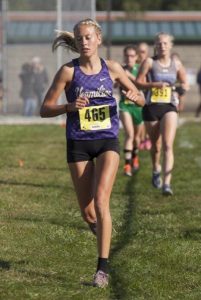